We are back, having survived a trip ten years back in time. The author has finished writing what most of you deem “how the nerd got the cheerleader.” She has rewrites to do, but hopefully in early May, it will be fit for public consumption. Then, we can pick up where we left off in LAC 11.

In the meantime, the first chapter follows…

In my mind, the word possessed enough volume to put my every nerve ending on high alert.

I made another study of the paper I held, as though it would somehow alter the moment: Claudia Kitterman FBLL President 4:30 Thursday UG Student Union. The review did nothing.

I glanced to the tables again. At one, a young woman sat, totally absorbed in scrawling notes as she pored over a thick textbook. She did not look like the president of anything—including her own fan club. At another, two males conversed while they sorted and stacked their books and papers. They perhaps boasted some underdeveloped presidential qualities, but still, neither of them looked at all like a Claudia.

Then, my eyes traveled once more to the dreaded inevitability, my fate. In the far corner of the union, two small tables had been shoved together, and seven people gathered around, laughing, talking, completely oblivious to anyone but themselves. History told me they were the pretty people, the kind who made school a living hell, the kind who looked down their noses at me with utter disdain. Maybe they didn’t. They probably didn’t. But it always felt as though they did.

And now! Now, I had to walk to that table teeming with them and ask which one had an appointment with me. Shit! The sheer idea of that made me want to turn tail and run, stopping somewhere along the way to retch the swarm of butterflies from my stomach. Deep breath!

After a bit of stealthy scrutiny, I decided my meeting had to be with the short-haired blond. Yeah, she looked like a president … of something. Okay, maybe they all did.

A panicky peek at my watch informed me I was now four minutes late. I cleared my throat, braced myself, and trudged like a trooper to the table.

“Claudia Kitterman?” I croaked and immediately castigated myself for sounding as inept and as intimidated as I felt. The instantaneous wave of laughter from them did not help, and even though I knew it was probably nothing more than coincidence, heat overtook my face.

END_OF_DOCUMENT_TOKEN_TO_BE_REPLACED

Buy the complete set of LAC paperbacks in our bookstore and receive the 9th book free. Yep, that’s free Spiders! Apparently when it comes to spiders, you have to give them away.

Book 8 of our madcap adventures is in the pipe. Smoke it. Flush it. Play it. Or wait for its release sometime in April.

It is entitled, L-Word C-Word, and it is a Maggie and Susan weekend. If you’ve read Savages, book 3, you know what they are capable of doing to us, and trust me, they did not disappoint. I will get sample chapters up as soon as I get the blessed go-ahead.

Blurb: Christmas comes to the Lesbian Adventure Club. But don’t expect ladies dancing or maids a-milking. No, try hookers, cookers, bridge trolls, and keepers of the place to pee. After all, it is July. 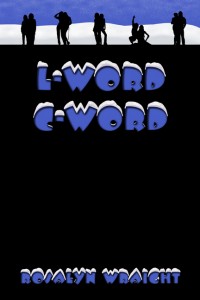 Blurb: With Holly and Laura as hostesses, absolutely anything could happen, and the crew is preparing for the worst—or the best, depending upon perspective. A weekend of mystery awaits them, but it’s the behind-the-scenes ones that prove hardest to solve. Do our amateur sleuths have it in them? Even against the formidable Detective Laura McCallister?

There is a link (at the page-top and in the Pages menu) to two sample chapters.

Can you say the title five times fast? I have problems with one time slow.

The ebook can be found here, while the paperback is here on Amazon.