Our 20th book, Living Dead(heads), is set to be released tomorrow in the LAC bookstore. It will be in paperback later this month. Please try to contain your excitement. 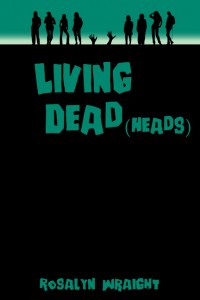 Blurb: Newsflash: Gossip columnist Heady Heaper whacks the mayor of Granton! But she won’t stay dead!
What other horrors await the 1930s crew at the mayor’s mansion? They’re about to find out.

Woohoo, the author has completed the first draft of LAC 20! Now, she goes back to word one, but she usually busts butt to get it to third draft. That said, I suspect it will be ready for public consumption by mid-September. Then, she can take care of these wandering characters in here who are in desperate need of closure. Pity for them. Elation for us.

I will keep you posted!

So, the author was blazing along with our book, and with her other hand, she was playing with some ideas for a new totally unrelated book she was going to use in November for NaNoWriMo. Then, she gets frustrated, claiming that you really cannot adequately flesh out a character without hearing her voice. So, she stops work on our book and starts writing the other one “just to get a feel for the protagonist.” Uh huh, Roz. And now 38,000 words later, she has two frickin’ books in the works.

Needless to say, we are feeling a bit neglected here, and, if truth be told, a bit crowded, too, with all these new and very fleshy characters in here. They seem nice enough, though, and I hope there will not be hell to pay when we do our best to wrangle the author and get her back to our book. Jesus, the things chicks have to do.

It is astounding how swiftly authors can get on the stick when you insinuate that their writing is unreadable.

“Claudia, I have to work late,” I lied, and it made me sick to my stomach.

“Oh, really? Any idea how long?” the green-eyed inquisitor asked.

I returned the sentiment and thought for sure I’d hurl. I disconnected, threw my phone to the passenger seat, and hit the gas.

A few moments later, I eased into the drive-thru lane at Road Swill’s biggest competitor. After a two-car wait, my eyes frantically scanned the overwhelming menu. Road Swill’s was simple and to the point, and it sure as hell didn’t have sizes in Italian sounding words. This was goddamn stupid, and when the crackly voice on the speaker asked what I wanted, I said, “Latte, medium.” She translated my emphasized word into pseudo-Italian as though I were a moron, not a rebelling traitor trying to make a point.

It didn’t take long to make it to the window where a gaudy cup was presented to me. As I waited for my change, I glanced at my watch: four-thirty five.

With fifteen minutes to kill, I took a spot in the parking lot, cut the engine, and lit a cigarette. A rolled down the window halfway, and January rushed in as though welcome. I was nervous, frickin’ nervous. Pacing would have helped, but that was close to impossible in a car’s front seat.

Now don’t go thinking I was simply being my wussy self. You would have been nervous, too. At least, I hope you would have been. It was not everyday you loitered in a parking lot until it was time to go murder someone. Seriously, that was exactly what I had to do and why the hell I had lied to Claudia. Seeing myself as neither murder nor liar, I was in way the hell over my head. And to shove my head under even further, Alison was my intended victim. Alison! Jesus, I’d rather murder myself than even say an unkind word to her, but here I was.

END_OF_DOCUMENT_TOKEN_TO_BE_REPLACED

No, we have not fallen off the face of the earth, nor have we been banished from the author’s brainpan. We are very much alive and mostly well.

We’re about halfway through LAC 20 at Alison and Janice’s, and its title is Living Dead(heads). Needless to say, it has not been a nice relaxing weekend at the mayor’s mansion. It never has been, and it’s probably safe to assume it never will be.

I will do my best to swipe Chapter 1 for you as soon as she bumps it from first draft to second. Trust me: You do not want to read it before then anyway.