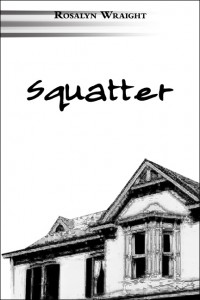 Okay, this does seem weird to be swiping chapters of a book that has nothing to do with the DWD or our favorite dick. Regardless, for your perusal, the first two chapters of Squatter follow. If you read it, you hereby vow to donate to the Get Kate Out of the Pokey Fund, if needed.

Trinity MacNeil scolded herself for feeling so excited, and yet, she could not stop the smile spreading across her freckled face. Seizing a deep calming breath, she dropped her leather satchel onto the porch, and then, her trembling hand aimed a silver key at the front door’s lock. A twist, a pull, and a timid push brought a creak that punctuated the moment, this new beginning.

Her smile widened even further when she made her first steps into the house. She spun in a circle, her eyes taking in the huge foyer. Then, she plopped onto the second last step of the staircase and released a tremendous sigh.

This was hers. All hers. Despite its drab walls and lusterless woodwork, it looked luxurious to her, the proverbial dream come true. While it hadn’t cost her a cent, it came at a very high price.

Instantly, her excitement dissipated, and sadness rushed over her. Her aunt Ronnie had died here just three weeks prior. She was her mother’s sister, and now, they were both gone. Trinity hadn’t been that close to her aunt, or maybe her regret made her believe that. They had regularly exchanged long, handwritten letters and sent birthday cards. On holidays, they had talked on the phone. Yet, she had declined her aunt’s every invitation to visit, and now, she had to live with the fact that she hadn’t seen her since the day she graduated from college, nearly six years ago. The time before that was at her mother’s funeral, only months earlier. She believed that not being a physical part of her life had a consequence: Her aunt hadn’t even told her she had ovarian cancer. The lawyer said that by the time she got diagnosed, they had given her six months to live. She chose the treatment-less route and made it barely two before she died—in this very house, this house that was now Trinity’s.